The first and foremost of  the services of Mota Maharaj is, in the translators view, his unique innovation of silence rooms. There have already been ecclesiastical retreats, specially in Catholicism, but the difference between the two is great, so great that Pujya Sri Mota’s silence rooms deserve the name of an original contribution to the spiritual world. 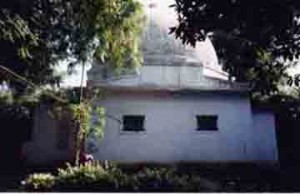 One of the Silence Rooms in the Hari Om Ashram in Nadiad, Gujarat, India, where spiritual aspirants go to spent time in solitude chanting Hari Om.

A person who wants, to devote his or her whole time in sadhana for a fixed number of days, gets, when his turn in a queue comes, an entry into a specifically-constructed dark room. It has the barest minimum of ventilation. There are a bath room and a latrine within it. Electric lights are provided but only for reading or writing spiritual literature and for physical needs.  Introspection is a must for any self-perception and self-reform. The darkness of the room helps the person in turning the mind’s searchlight inwards, since in a closely shut dark room the senses largely lose their characteristic power of making a person an extrovert. Letters to and from people outside are banned except for an urgent unavoidable necessity. Food, also, is provided by a special contrivance. In the front wall there is a big hole with a sill and two doors opening inside and outside. An attendant opens the door on his side of the wall, puts the food on the sill and closes the door. The aspirant then opens the door on his side and takes the food inside. This makes it impossible for him to see a human face during his whole stay in the dark room. An aspirant thus enjoys all the advantages of that kind of solitude for which earnest seekers of truth used to resort in ancient times to woods or caves in a mountain. Added to this is the supply of all the amenities which have become indispensable in modern times.

Silence rooms thus provide an easy means to go into the Self for some days and then come out on life’s stage with fresh vigour and a new outlook gained from concentration on God. There is no ban on any kind of worship. Persons belonging to all the creeds and both the sexes have, in thousands, taken advantage of this facility. An extremely negligible number among them have come out before the expiry of the period they had fixed and thus failed to pass through this ordeal. For, an ordeal it is – specially for the numerous novices who have spent their lives outside among loved ones and others and have been always engaged in doing some concrete work. When Sri. Ambubhai Purani, a distinguished follower of Pujya Sri Aurobindo, learnt that a person already inside a silence room was going to spend 51 days there, he was amazed and remarked, ‘Unless the spiritual guide of the person so closely confined for so long a time is a great adept, the inmate would go mad in such stark solitude. The fact that one of the most stringent punishments in jail was ( or is? ) to confine the offender in a solitary cell supports this view. But the highest number of days spent in a silence room is 388 days. The credit of this feat goes to two persons – a young Canadian of 24 years named Robin Armstrong and a Punjabi young man popularly known as Maunibaba.

Yes, the secret of this phenomenal success of thousands of persons taking strict silence in these silence rooms of Pujya Sri Mota, and of some in staying inside for many days or repeatedly, lies in the fact that the rooms are surcharged with a powerful spiritual atmosphere which Pujya Sri Mota Maharaj has subtly infused into’ them and which have become the mainstay of new entrants or long-time users.