The Solitude Rooms in Nadiad 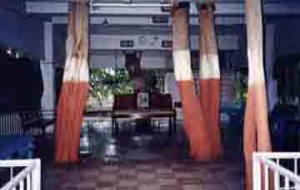 The Prayer Room at the Nadiad Ashram, built around the banyan tree that Mota would chant in.

The Solitude Rooms in Nadiad

This is the ashram that Mota’s guru Baliyogiji predicted he would build. It is an awe inspiring environment. There are 6 rooms in this ashram and it has been functioning since 1955. That’s almost fifty years, forty-nine to be exact. In this time thousands of sincere sadhaks have spent time alone chanting Hari Om, thus fulfilling the prediction of Baliyogiji.
The Prayer Room was the place where everyone would come to pray and chant on the days when sadhaks entered or came out of the silence room. This room was carefully built around the banyan tree that Mota used to climb and chant Hari Om in. The banyan tree spreads out over  the entire ashram and the silence rooms are built within the spaces where there are no parts of the tree. The largest banyan tree is 10 km square in Calcutta. 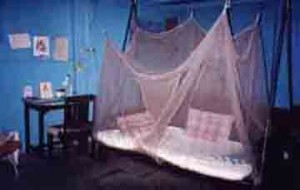 Inside a Solitude Room in Nadiad Ashram

Inside the Solitude Room at the Nadiad Ashram
These silence rooms are the deluxe models! The bed is in the center of the room… a mattress on a swinging wood frame that doubles as a swing. It has a mosquito net and cushions! There is lots of room to move around in. There is even a desk to write on if one was so inclined. Writing of spiritual insights was acceptable. There is a chair too!  In this ashram, there is a system where spiritual bhajans could be heard at certain times. The bhajans could also be turned off from inside the room and not heard at all. 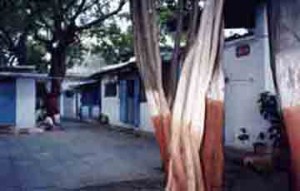 There are several solitude rooms in a row all within the Banyan tree. This allows for convenient serving of meals and other necessary functions in caring for the sadhus in solitude. Meals can be dropped to all the rooms without getting cold. Laundry can also be collected in one trip.