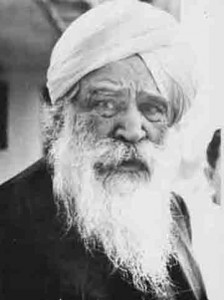 Excerpts from Naam or Word,
by Kirpal Singh

Manjusri’s Summation:
Thereupon, the blessed Lord, sitting upon his throne in the midst of the Tathagatas and highest  Bodhisattva-Mahasattvas from all the Buddha-lands, manifested his Transcendent Glory surpassing them  all. From his hands and feet and body radiated supernal beams of light that rested upon the crowns of each Tathagata, Bodhisattva-Mahasattva, and Prince of the Dharma; in all the ten quarters of the universes, went forth rays of glorious brightness that converged upon the crown of the Lord Buddha and upon the crowns of all the Tathagatas, Bodhisattva-Mahasattvas and Arhats present in the assembly. At the same time all the trees of the Jeta Park, and all the waves lapping on the shores of its lakes, were singing with the music of the Dharma, and all the intersecting rays of brightness were like a net of splendor set with jewels and over-reaching them all. Such a marvelous sight had never been imagined and held them all in silence and awe. Unwittingly, they passed into the blissful peace of the Diamond Samadhi and upon them all, there fell like a gentle rain, the soft petals of many different colored lotus blossoms – blue and crimson, yellow and white – all blending together and being reflected into the open space of heaven in all the tints of the spectrum. Moreover, all the differentiations of mountains and seas and rivers and forests of the Saha World blended into one another and faded away leaving only the flower – adorned unity of the Primal Cosmos, not dead and inert but alive with rhythmic life and light, vibrant with transcendental sound of songs and rhymes, melodiously rising and falling and merging  and then fading away into silence. 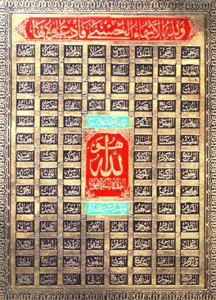 Excerpts from Naam or Word,
by Kirpal Singh

ISLAM
Among the Muslim Sufis, it is known as Sultan-ul-Azkar (the king of prayers). Another order of Sufis call it Saut-i-Sarmadi, (the Divine Song). They also call it Kalam-i-qadim (the Ancient Sound), and the Kalma or “Word,” Nida-e-Asmani (the Sound coming down from Heaven). The fourteen Tabaqs (regions) were made by the Kalma – the Word.
Khawaja Hafiz, a great divine, says:
“From the turret of the Heaven, a call bids thee Home, but fallen into the snares thou listeneth not. No one knows where the Mansion of the Beloved lies, but sure enough, the chiming of the bells proceeds therefrom.”
Again,
“Take the stop-cock from thy ears, and hear thou the voice of emancipation coming to thee. Attach yourself not to the material world. The elixir of life is showering from above.
The beat of Love while sounding in the Heavens, sends blessings to the souls of the devotees.”
Jalaluddin Rumi, in his Masnavi, says: “Grow not skeptical, but attune thyself to the Sound coming down from the Heavens. Thy soul shall have revelations from afar. What are these? the glimpses of the Unrevealed. Were I to speak of these sweet melodies, even the dead shall rise from their graves.”
Again,
“Rise above the horizon, O brave soul, and hear the Melodious Song coming from the highest heaven.”
Prophet Mohammed said that he heard the “Voice of God” as any other sound.
Shah Niaz, another Muslim devotee, says: ”Soul is the Will  and the Secret of  God. Its meditation is carried on without the help of tongue and palate. Alas! Thou art stuck fast in the physical bondage and do not hear the Holy Sound of  God. My Beloved  is speaking  to thee all the while, but woe to thee for thou heareth not the Voice.”
Again,

The Kabah in Mecca

“The whole universe is resounding with the Sound, and thou hast only to open the door of thine ears. For opening the ears, it is sufficient to stop hearing the outer sounds. If you do this, you will hear the perpetual and unending Sound. It is infinite and has no beginning nor end, and on account of that, It is called Anhad (i.e., without any limits). Without this Word – the Eternal Sound – an expression of the Infinite, the world could not have come into existence. Hold communion with the Melodious Sound and lose yourself in it, O wise man. O God! Show me that place from where the Kalma (Sound Principle) proceedeth without Words.”