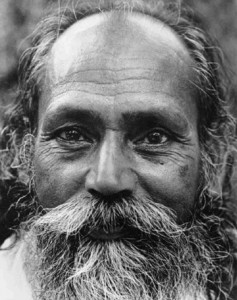 Tasya vachakah prai
Om is the word denoting God (Ishvara).
tasya        His
vãchakah    denotes, signifies
pranavah    the word Om
The word pranava is made by pra, which means “excellently” and nava which means “newness.” Pranava thus means the most excellent, eternally new principle, the ever-present moment, which is the mantra Om.
The word Om denotes Ishvara . Ishvara is the supreme God, which is signified by the word Om. What is the relationship between significance and the signifier? Is it a conventional relationship that is created by the human mind, or is it a relationship like father and son, or lamp and its light, which are permanent and cannot be altered in any way? This man is the father of that boy, and that boy is the son of this man. The relationship of father and son never changes. The son never becomes the nephew or the brother of his father. In the same way, pranava (Om) indicates Ishvara It is not a conventional relationship, created by the mind. It is a permanent relationship like light signifies a lamp.
How is the relationship of Om and Ishvara eternal? Ishvara is the infinite, all-powerful Lord of creation. Om is the primal sound, the primordial energy of creation that exists prior to the manifest activities of the three gunas. The relationship between Ishvara and Om is therefore eternal, as the Creator and the energy of creation cannot be separated.
If the relationship between a word and its meaning is eternal, natural, and not created by the human mind, then the word will signify the object. Om signifies Ishvara. The meaning of Om is Ishvara, the sound of Om is the primordial sound of creation, which is Ishvara and perfect concentration on Om brings the realization of Ishvara.
Ishvara is the union of purusha and prakriti. In that union, the creative energy, which is Om, also exists eternally. Ishvara’s presence is experienced through His name, Om.
Ishvara and Om, the Lord of creation and the energy of creation, exist before creation and also permeate the creation. The sound vibration is the vehicle for the manifestation of the subtle essences.
Sound is an evolute of prakriti and subject to creation and dissolution. The sound of ??(Om, also spelled A-U-M) has four parts: (A, pronounced as “awe”) represents Brahmä, the creative aspect of God; (U, pronounced as “oo” in tooth) represents Vishnu, the sustaining energy of God; and (M, pronounced as “m” in um) represents Shiva, the destructive energy of God. These three energies change according to the cycle of creation and dissolution of the manifest universe, whereas the fourth aspect of  ?, which is the half mora of Om, represents the eternal, absolute, immutable, transcendent knowledge. It is a sound beyond the three, and is vocalized in the continuing nasal reverberation of the sound Om.