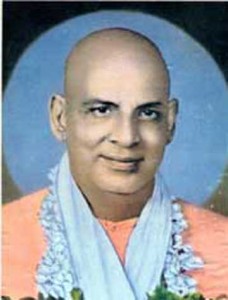 Om (Aum) is everything. Om is the Name or symbol of God, Isvara or Brahman. Om is your real Name. Om covers the whole threefold experience of man. Om stands for the phenomenal worlds. From Om this sense-universe has been projected. The world exists in Om and dissolves in Om. ‘A’ represents the physical plane. ‘U’ represents the mental and astral plane, the world of intelligent spirits, all heavens. ‘M’ represents the whole deep sleep state, and all that is unknown even in your wakeful state, all that is beyond the reach of your intellect. Om represents all, Om is the basis of your life, thought and intelligence. Om is everything. All words which denote objects are centred in Om. Hence the whole world has come from Om, rests in Om, and dissolves in Om. As soon as you sit for meditation, chant Om loudly 3 or 6 or 12 times. This will drive away all worldly thoughts from the mind and remove Vikshepa (tossing of mind). Then take to the mental repetition of Om.
The Japa of Om (Pranava Japa) has a tremendous influence on the mind. The pronunciation of the sacred syllable Om, is one which has engaged the attention of all Europeans devoted to Eastern studies. The vibrations set up by this word are so powerful that, if one persists in taking recourse to them, they would bring the largest building to the ground. This seems difficult to believe in until one has tried the practice; but once having tried it one can easily understand how the above statement my be true and perfectly correct. I have tested the power of the vibrations and can quite believe that the effect would be as stated. Pronounced as spelt, it will have a certain effect upon the student; but pronounced in its correct method, it arouses and transforms every atom in his physical body, setting up new vibrations and conditions, and awakening the sleeping power of the body.