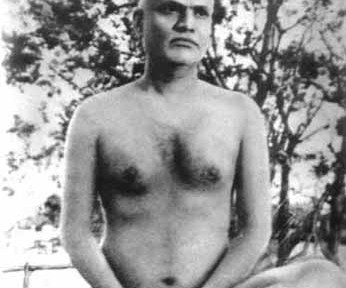 This article was small selection taken from a 99 page document put out by the Hariwani Trust entitled’ “Pujya Mota Jeevan Darshan”. The document is a full biography of Mota Maharaj, complete with pictures. It does not mention who wrote it. There is a website in development, but I was unable to access it…. www.pujyamota.com  You can expect more quotes from this document in the future.

Nasty Disease
Reverting to the earlier times, Chunilal found himself in the grip of a nasty disease. Was it epilepsy ? Was it hysteria? Whatever it was, the causes of the attack were clear. He had seven mouths to feed from his monthly income of 47.5 rupees (50 rupees’ pay – 2.5 rupees’ compulsory saving). He could not buy even shaving materials, and got himself shaved once in a month. The elder brother was in bed with T.B (tuberculosis). Not minding all these difficulties, he bought the costly First Class ticket for Bhavnagar and took the brother there for treatment by a well-known ‘death-saver’ Ayurvedic expert in T.B. – with high fees of course. “The most unkindest cut, ‘ however, lay in the fact that he was repeatedly taunted by his mother and elder brother for ‘doing nothing’ for being a ‘close – fisted miser’. (And it was Chunilal who had, after the brother’s death, to repay the debts incurred by the brother behind his back from their relatives ). At the same time Chunilal had already taken, with the holy water on his palm, an irrevocable oath to serve the country on a modest salary and never to accept any offer of a tempting lucrative job. He was thus in a torturing fix. Intensely he yearned to free himself from the worries of a rigorous debtor, the insults heaped upon him and the pricks of his conscience, but saw no way to do so. Added to all this was his constant anxiety, lest the untouchable boys whom he used to take to the public pond for washing clothes and vessels were belaboured by some angry high – cast men. Pressed on all sides, he found himself a helpless victim of overpowering emotion and inability to extricate himself from the besetting circumstances. All this preyed upon his mind so heavily and persistently that he began to have fits of unconsciousness. He had even the experience of a sudden onset, which made him fall down from his cycle and see the institution’s coins loosely scattered on the road.
Desperate Attempts
Chunilal had, it seems, an innate love for solitude. For relaxation from the irritating situation, he resorted twice to solitary places on the bank of the holy Narmada. As all that is God’s expression and more so, as rivers sustain life, they are worshipped in India as God’s emblems, as Divine Mothers. On the first occasion, Chunilal was accompanied by Shree Maheshbhai Mehta and Shree Bhanuprasad Pandya. He made the second trip without a single companion and stayed in the Ranchhodji Temple beyond the Mokhdi ghat (ghat = bank) of Narmada.
A saintly sannyasi lived there. In pursuance of his habit he served that saint  there. The saint saw Chunilal succumb to the fits and, to bless him for his loving service, said, “Chant the holy Name. It will cure you. ” And then followed his prophecy: “After one year, you will happen to meet your Guru.” Chunilal wistfully reflected: “Mere chanting a cure for this fell disease ! Impossible. Oh if only he had given me some potent charm!” (Sadhu’s do sometimes possesses charms or effective drugs.)
His gloom sank deeper still. “What a shame,” he said to himself. “Only weak-minded, over-sensitive women catch this disease, and I, a young man in his twenties, so effeminate as to be a prey to it! Better death than this.” So he came to the desperate resolve of ending his life. On his return from the Ranchhodji Temple, he came to a high rock, a very solitary place up the river, higher up than Garudeshwar. ‘Just the site for me,’ he thought and down he threw himself from that high rock into the still and deep waters of Narmada.

Miracle Saves Him
Hardly did his soles touch the soft cooling water of the holy Narmada, when a gigantic wave rose up and hurled him back on the bank far beyond the spot from which he had fallen. And in the middle of that huge wave he had the vision of a charming nymph. ‘Mother Narmada Herself!’ he was convinced.

This vision and the up throw assured him: “By the (GOD’S) grace I am meant for something.” That was turning point of His life. Since then there arose within him an urge to turn his life-course God ward and its intensity grew and grew till it became the one and only passion of his life.

Prodding Vision
As has been said, Chunilal’s patroness was more to him than his own mother, – one to whom he could disclose his deepest secrets. To her he went straight from the place of the above miracle, – but alas! His want of faith in the potency of chanting the Name continued. God comes to the rescue of his would-be whole-hearted devotee when he persists in his error. In her house, too, Chunilal had a hysteric fit just when he came on the second floor at the top-end of the staircase. Like a stone, he rolled down every step till he fell with a thud on the paved bricks on the first floor. In this semi-conscious state he had the vision of the benevolent sadhu whom he had met earlier. “Why won’t you even try chanting? What do you lose?” The sadhu urged in irritation. Even this vision and the reproach had no immediate effect.
But at that time Chunilal’s mind and other internal implements had no desire at all for spiritual effort and no faith in the chanting. All the same the vision was too impressive to be overlooked and he narrated it to his trusted mother. “Dear, dear,” she exclaimed. “You are very fortunate! Now just go on chanting the God’s name at all times – while you eat and drink, walk and talk, do anything whatever or sit at ease. It is sure to cure you.”  Chunilal had at that time greater faith in his spiritual mother than in that sannayasi. It was her persuasion that made Chunilal begin chanting.
So, at last, Chunilal began chanting the Hari Om mantra (a potent chant). Thence began his sadhana (spiritual effort or process of the elevation of the soul to Life Divine). The chant provided a healthy substitute for his absorption in low thoughts. A new interest in life, an enthusiasm for coming out of its groove, courage, moral and mental stamina, and proneness to equipoise, increased day by day and the fits subsided entirely in 3 or 4 months.