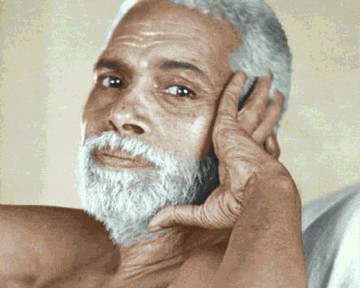 By Ramana Maharshi, excerpts from The Collected Works of Ramana Maharshi,edited by Arthur Osborne. There is an excellent website for Ramana Ashram that includes many photos and all of Sri Ramana Maharshi’s works. Visit them on line at www.ramana-maharshi.org

b. Those who have great fear of death seek refuge at the feet of the Supreme Lord who is without birth and death, in order to overcome their fear. They then die to themselves along with their adjuncts (sense of “I” and “mine”). Will those who are (have realized themselves to be) deathless entertain again the thought of death?

1. Since we perceive the world we must agree unanimously that there is a power which is capable of becoming multiple. The picture of name and form, he who sees it, the cloth on which it is based (painted) and the light which illuminates it are all oneself.

2. Every system of thought postulates the three fundamentals; the individual, God and world. Only the one appears as the three. It is only as long as there is an ego-sense that one says that the three are really three. The best thing is to renounce the ego-sense and remain in one’s true state.

4. If  one has a form the world and God will also have forms. If one has no form who is there to see their forms, and how? Can anything be seen without the eye? The real eye is the Self which is the eye of Infinity.

5. The body is of the form of the five sheaths. Therefore these five are included in the term ‘body’. Is there a world in the absence of the body? Has anyone ever seen the world without a body?

8. Under whatever name and form one worships That which has no name and form, it is only a means of perceiving it. To know the truth of one’s Self as the true reality, and merge and become one with It is the only true perception (realization). Understand this.

9. The dyads and triads always depend upon the One. If one sees within one’s mind what that One is, they disappear. Only those who have seen this have seen the Truth. Know that they will never be perturbed.

12. What is neither knowledge nor ignorance is (real) knowledge. Knowledge of  (objects) cannot be real knowledge. The Self, which shines without there being anything else to know or be known, is knowledge. Know that it is not nothingness.

16. When we look into them, what are time and space apart from us? If we are bodies we are involved in time and space, but are we? We are the same now, then and at all times; here, there, and everywhere. We exist; we who are beyond time and space alone are.

19. The dispute as to which prevails, fate or free will, interests only those who do not know the source of both. Those who have realized the Self, which is the ground of fate and free will, are free from them. Will they again resort to them?

20. Seeing God without seeing the Self who sees, is only a mental image. Only he who has seen himself has seen God, since he has lost his individuality and nothing remains but God.

21. If it be asked, ’What is the meaning of the old scriptural texts which speak of seeing oneself as seeing God?’ The reply is how, being one, one can see oneself? And if one cannot see oneself how is one to see God? Only by being swallowed up by God.