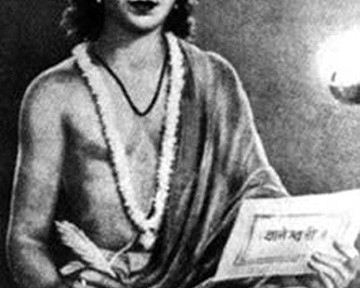 These devotees dance in ecstasy while singing my praise, making all acts of expiation superfluous, as in them no trace of sin is left.
In the case of such devotees, control of the senses and mind become redundant, the holy places become desolate, and the activities of the hell come to stop. Self-control does not know whom to control, self-restraint does not know whom to restrain and the holy waters do not find even a trace of sin to cleanse. Thus by loudly singing my name, my devotes heal the miseries of all beings and make the whole world resound with bliss (196-200). They give light without dawn, eternal life without nectar and God’s vision without yogic practice. they do not discriminate between the prince and the pauper or the high and the low, and they open the kingdom of heaven to all creatures. one rarely goes to vaikuntha, but by flooding the world with God’s name, these devotees have made this world a veritable Vaikuntha (abode of Lord Vishnu). The sun shines bright, but has the defect that he sets; the moon is full at times, but my devotees are always perfect. The clouds are generous but they too become empty, so their simile is not apt. My devotees are without doubt like the merciful lord Shiva (201-205). People have to serve me in thousand births to be able to utter my name even once; but my name dances on their tongue to their great joy. I am, therefore, not to be found in Vaikuntha or in the sun’s disc; I even pass the minds of those who practice yoga. O Arjuna, I am positively to be found in the home of my devotees, who constantly sing my praise in a loud voice. Enwrapped in singing my virtues, they forget the time and place and become absorbed in the bliss through my kirtana. Through the constant utterance of my name, Krishna, Vishnu, Hari, Govinda and the open discourse on my divine essence, they abundantly sing my praise (206-210) and roam all over the world, singing hosannas to me.

I am the father of this universe, the another, the supporter, the grand-sire; the holy object of knowledge, the syllable Om and the Rik, Saman and Yajus.
I am the gatherer of world, as under my inspiration this eightfold prakriti gives rise to this entire creation. Since the image of Shiva is half male and half female, I am also the mother of this animate and inanimate world. And that which supports the world and promotes life cannot be any other than myself. since both prakriti and purusha have emerged from my unconscious mind.
I am the grand-sire of all three worlds. I am also the knowable, the meeting place of the four Vedas, in whose sacred abode the different paths leading to knowledge meet, where the 4 different sects come to an understanding, where the different shastras come to know one another, where the divergent paths of knowledge coalesce, and which is, therefore, called holy.
I am also that Omkara, Primeval sound, which has sprouted from the seed of the sacred temple of the manifestation of the Brahman. I am also also the three letters a, u, m, which emerged from the womb of the Omkara and which gave birth to the three Vedas. I am, therefore, the three Vedas, the Rigveda, the Yajurveda and the Samaveda, and the source of all traditions of spiritual knowledge.