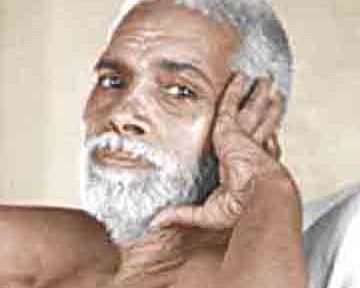 An excerpt from the Collected Works of Ramana Maharshi by Arthur Osborne. There is also an excellent website for Ramana Ashram that includes many photos and all of Sri Ramana’s works. Visit them online at www.ramanamaharshi.org

13. The residual impressions (thoughts) of objects appear unending like the waves of an ocean. When will all of them be removed?
As the meditation on the Self rises higher and higher, the thoughts will get destroyed.
14. Is it possible for the residual impressions of objects that come from beginningless time, as it were, to be resolved, and for one to remain as the pure Self?
Without yielding to the doubt “Is it possible, or not?”, one should persistently hold on to the meditation on the Self. Even if one be a great sinner, one should not worry and weep “0! I am a sinner, how can I be saved?”; one should completely renounce the thought “I am a sinner”; and concentrate keenly on meditation on the Self; then, one would surely succeed. There are not two minds—one good and the other evil; the mind is only one. It is the residual impressions that are of two kinds—auspicious and inauspicious. When the mind is under the influence of auspicious impressions it is called good; and when it is under the influence of inauspicious impressions it is regarded as evil.
The mind should not be allowed to wander towards worldly objects and what concerns other people. However bad other people may be, one should bear no hatred for them. Both desire and hatred should be eschewed. All that one gives to others one gives to one’s self. If this truth is under stood who will not give to others? When one’s self arises all arises; when one’s self becomes quiescent all becomes quiescent. To the extent we behave with humility, to that extent there will result good. If the mind is rendered quiescent, one may live anywhere.

15. How long should inquiry be practised?
As long as there are impressions of objects in the mind, so long the inquiry “Who am I?” is required. As thoughts arise they should be destroyed then and there in the very place of their origin, through inquiry, If one resorted to contemplation of the Self unintermittently, until the Self was gained, that alone would do. As long as there are enemies within the fortress, they will continue to sally forth; if they are destroyed as they emerge, the fortress will fall into our hands.

17. Is not everything the work of God?
Without desire, resolve, or effort, the sun rises; and in its mere presence, the sun-stone emits, the lotus blooms, water evaporates; people perform their various functions and then rest. Just as in the presence of the magnet the needle moves, it is by Virtue of the mere presence of God that the souls governed by the three (cosmic) functions or the fivefold divine activity perform their actions and then rest, in accordance with their respective karmas. God has no resolve; no karma attaches itself to Him. This is like worldly actions not affecting the sun, or like the merits and demerits of the other four elements not affecting the all- pervading ether.