This article was taken of the web from Lifestyle Monastic Resources. Please visit their site for much more information.
http://www.buddhamind.info  This is an excellent website with much experiential content. It is well worth a visit. My gratitude goes to those who put it all together with even a good sense of humour.

Chanting: The Buddha’s teaching was preserved orally in various chant forms until about 80 BC when it was written down. The tradition of chanting is still maintained in monasteries today, despite the many books available, and chanting is a significant part of most Buddhist rituals. Monks and nuns are expected to memorise quite a lot of this chanting as part of their monastic training. This doesn’t necessarily involve learning the Pali language – although many commonly repeated ‘key’ terms would take on a much deeper meaning over time. A great many interactions between laity and monastics involves some form of chanting, and initially a junior can make use of a book but there comes a time when one is asked to ‘put the book away in public’. There is a noticeable difference in the energy of a ceremony when it is all done ‘live’ – as opposed to just being read from a book.

Making the effort to learn chanting has a healthy strengthening effect on the mind; it develops concentration, patience and determination. Some people have a photographic memory but most monastics I know find the chanting quite difficult to learn. To begin with it seems impossible – nothing will stick in the mind – just this jumble of meaningless words with no grammatical clues as to the next word. Even when it has been memorised, chanting with a group takes practice. The words are in the mind somewhere but, because they are in a foreign language, recitation can’t be intellectual and it takes a particular type of internal process to be able to recite long passages from memory – a mixture of concentration, confidence and faith.

There is something about the collective mind that develops as a result of chanting from memory as a group that is very special and quite palpable. Because the chants have been handed down for over 2500 years there is a direct ‘connection’ to a historical lineage of monks and nuns. This sense of extended family is something that develops generally in monastic life – both in relation to the current sangha and to one’s ‘ancestors’ – but the chanting is such a familiar, repeated, historically consistent and impersonal part of monastic life that it most easily creates this sense.

Theravadin chants are not particularly musical – using only about three tones. There are two aspects to this: it means that pretty much any member of sangha can join the chanting so it is not an exclusive affair, and, even if the chants are completely unfamiliar, the steady pitch can have a very calming and peaceful effect on the mind – of both the chanter and the listener. This is enhanced when there is a group chanting as there is no set ‘stopping place’ – outside the beginning and the end – and breathing (for the chanters) is ‘as required’. So, the whole thing has a gentle flow, like a rolling tide of sound with a simple range of sound patterns.

Although there are almost endless chants there are certain groups that have come to be associated with various rituals and ceremonies. For many lay Buddhists these chants are quite familiar – in fact many people memorise sections – and this familiarity reinforces the sense of community – ‘communion’ – that can take place while verses are being recited. Because the chants are about superior human qualities, purity, natural laws – and the development of these – this adds a very meditative, reflective facet to the process. 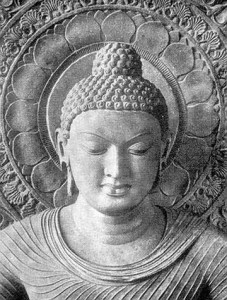 Below are details of some of the regular occasions when chanting occurs. The list is by no means complete as almost every organised monastic gathering – large or small – involves some chanting, either verses from the suttas or various formulae for a specific function.

Puja: This is the twice daily meeting of the sangha – in the morning at 5:00 and evening at 7:30 – when a range of verses are chanted. In the morning, reflections are commonly on aspects of the Buddha’s teaching while they are more devotional in the evening.

Dana: Another frequent chanting situation is the response to the offering of requisites – particularly the daily meal. The basic reflection is that good deeds have good as their result, and the chants are an expression of the gratitude of the sangha for those things offered with the wish that the donor benefit from that goodness and that their life be free of difficulty.
“May there be for you all blessings and may all the devas guard you well. By the power of all the Buddhas, ever in safety may you be”
“Just as the rivers full of water fill the ocean full, even so does that which is given here benefit all beings”
“May all distress be averted, may all diseases be avoided, may there be no dangers, may you be happy and live long.”

Blessing: Also common is the chanting of blessings. Any number of things can be the focus for blessing – a baby, a wedding, a house, a car, etc. – and the format is pretty much the same for all. The request and responses for taking the refuges and precepts are usually chanted first and then the devas (the ‘forces’ of goodness) are invited:
“May the devas come here, from all round the world systems, from the mountains and the sky, from town and country, wherever they may be let them be present here.”
There is then a series of auspicious chants – extolling the virtues of the Buddha, outlining aspects of his teaching and encouraging the listener to make endevours on the spiritual path.
“Victorious underneath the Bodhi tree, He increased the joy of the Sakyas. May this same victory be yours;”

Maha Parit: This is a special form of blessing ceremony peculiar to Sri Lanka. It involves a group of monks chanting verses of blessing right through the night, finishing just after dawn of the next day. A pavilion is specially built for the monks to sit in while they are chanting.
The idea with blessings is that good begets good. Often at the end of the maha parit chanting, or after a retreat, or alms giving, or any meritorious deeds, the blessings thus accrued are shared with all beings.
“May those who are friendly, indifferent or hostile; may all beings receive the blessings of my life.”

Confession: This forms a standard preliminary to the chanting of the patimokkha every fortnight on the moon day. [view] The patimokkha is recited by one monk from memory and usually takes about 45 minutes of fast chanting. Juniors are encouraged to make an effort to learn the patimokkha but only a few would complete the task.

Funerals: Each Buddhist culture has a range of different funereal rites but the reference point of the chanting is always the naturalness of death. It is the unavoidable result of having been born and a full appreciation of the compounded nature of the body is what the chanting reflects.
“All conditions are truly transient. They have the nature to arise and cease. Having arisen, then they pass away. With their cessation there is peace.”
The chanting is usually quite solemn and monks would often be invited to chant in the deceased’s home – ideally every day for seven days. Water is often poured over the body – a little by each person – before the coffin is closed for the last time. Families will often make offerings at the monastery to mark the anniversary of the death. This would be after one month, three months and then annually.
Invitation In the spirit of mind training monastics will offer an invitation to their peers.
“Venerable Sirs, I invite reflections and admonishment from the Sangha. According to what has been seen, heard or suspected, may the venerable ones instruct me out of compassion. Seeing it, I shall make amends.”
Forgiveness “Forgive me, venerable sir, for all or any wrong doings done carelessly to the venerable one by way of body, speech or mind.”
“I for give you. You should also forgive me.”
Both ‘invitation’ and ‘forgiveness’ are chanted in Pali but the spirit of these occasions is well studied and creates an open atmosphere of care and trust. Try them at home some time.

Sermons: The Buddha’s teaching was an oral one. He gave regular talks to his disciples and we now read these as suttas and hear them as chants. The tradition of oral teaching is still maintained with talks regularly given by senior monastics. When the Buddha was first enlightened he was reluctant to teach and the Brahma god, Sahampati, came down and appealed to the Buddha to teach. This same entreaty is still used to encourage teachers to speak as teaching is generally only offered when requested.
“Just as the Brahma god Sahampati requested a boon with his palms joined in reverence, so too are there those here with but a little dust in their eyes. Pray teach Dhamma out of compassion for them.”

One form of chanting not often practiced in the forest monasteries of Asia but which seems to be popular in the West is mantra. These can be thought of as having some inherent esoteric value but my own feeling is that it is better to approach them as just another meditation object. As such they are best relatively simple, and any implicit meaning able to be contemplated. So, almost any word group – or even sounds – can be used although the emphasis should be on goodness. Try repeating the word ‘love’ a thousand time over. What is the result?
Each tradition will have a variety of phrases set to a variety of ‘melodies’ and it is difficult to convey the usefulness of this technique in words. Have a listen to these:
Namo Tass Bhagavato Arahato Samma Sambuddhassa,
Namo Sakyamuni Buddha,   The winds of change are gonna blow you away, Seek the centre of the storm each day. The winds of change are gonna tear you apart, Find the silence of the peaceful heart.