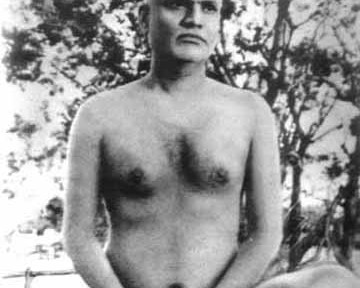 Final Instruction
When the period of initiation with Baliyogiji was over, the Guru said, “Dear boy! Your Guru is Shree Keshavanandji- Dhuniwala Dada, not myself. I came to you as it was he who impelled me (by mental telepathy) to initiate you. Go to Saikheda, near Itarsi, in the Central Province, have his blessings and then obey his orders implicitly. But, mind you, make full and proper preparations before you start.”

Proper Preparation
Chunilal decided to go to Saikheda in pursuance of the above instruction. Carefully he took leave for 7 or 8 days from the Antyaja Seva Mandal and scrapped together enough money for the journey to and fro and his stay there. And then he informed Balayogiji that all the necessary preparations were made. When on inquiry, Balayogiji learnt the details of the preparations, he felt sorely disappointed. Chunilal could not understand this deep regret and prayerfully requested Balayogiji to let him know how the preparations fell short of his expectations. “That’s nothing” Balayogiji grumbled out. “Real preparation lies in complete readiness in every way to burn one’s boats so that one can obey the Guru’s command not to return to the world at all the moment he orders.” It was then that Chunilal realized that, he was expected primarily to get his mother’s permission to stay permanently with the Guru. If he wanted it and that he should have faith enough that God would instill enough courage and capacity in his mother and elder brother’s widow to maintain the family somehow in his absence.
Mother’s Permission
The real stumbling block lay in securing the permission of his mother who doted upon him. God provides the way specially where there is the will. Providentially just about that his mother happened to go to Baroda to stay for some time with Prabhaben, his patroness. Chunilal seized the chance. He went to Baroda and requested Prabhaben, the mother of his soul, to exert her influence over the mother of his body and persuade her to let him become, if necessary, a full-fledged sannyasi (recluse) disciple of Keshavanandji. The mother resigned herself to the will of God. She gave the needed consent.

The Plunge
The next step was to tender his resignation from the Antyaja Seva Mandal. The Secretary, his well wisher, Shree Parikshitbhai Majmudar strongly advised him to desist from that foolhardy course. Not to talk of his personal security, it was sheer madness, he argued to leave in the lurch his mother, his widowed sister-in-law with her two children, and his two younger brothers who all depended upon him. But Chunilal was immovable. He was convinced that just as for the cause of his country, a voluntary take on sacrifices not only himself but his dear family also, one has but to sacrifice everything, including one’s family for the far holier Cause, the quest of God, – the cause of all causes – provided one is consumed with a ‘volcanic aspiration’ for gaining the goal. Chunilal’s attitude is in brief expressed in the following well known but slightly changed couplet.
“I would not love thee, Mother, so much Loved I not God still more.”
He took the plunge, sped to Saikheda, put up at a dharma-shala (a free lodging house), had his bath, hastened to the Guru and fell prostrate at his feet.
Dada, the Unaccountable
The bystanders stood aghast. They cried out “Come back! At once! ‘Dada’ (the Guru Keshavanandji) will knock you on your head! Beware of his danda (thick stick)!” They’re warning cries were not unwarranted, but Dada did nothing of the kind to Chunilal. Dada would exhibit another disgusting trait. He often burst out not only in a vernacular but would vomit the most obscene epithets. Chunilal was shocked. He was tempted to return at once.
The Saving Grace
Just then the superhuman traits and deep love of Balayogiji Maharaj rose up in his mind. They followed the thought that the Guru of an exalted personality like Balayogiji was bound to possess something valuable beyond his ken and that the crowds he saw could not have resorted to him for merely getting abused or beaten. Just at that psychological moment when his mind was, like a pendulum, swinging between doubt and faith, Dada, in the midst of his ‘irrelevant’ words and abuses, contrived to say something which Chunilal instinctively saw was meant exclusively for his ears. He asked him to watch the faces of persons roundabout when he (Dada) uttered something nasty and told him that some would seem to be growing pale, some happy and that he (Chunilal) should see them in private and find out the cause. For some days Chunilal did so and realized that Dada was merely repeating, like a gramophone record, every word and syllable that the persons concerned used in their troubles or quarrels in their homes. They admitted all that and added that, unwrapped in that volley of abuses lay Dada’s charity of heart and acumen in giving them secret and proper instructions to mend their ways or solve their difficulties. Thus Chunilal’s doubts were largely but not completely removed.