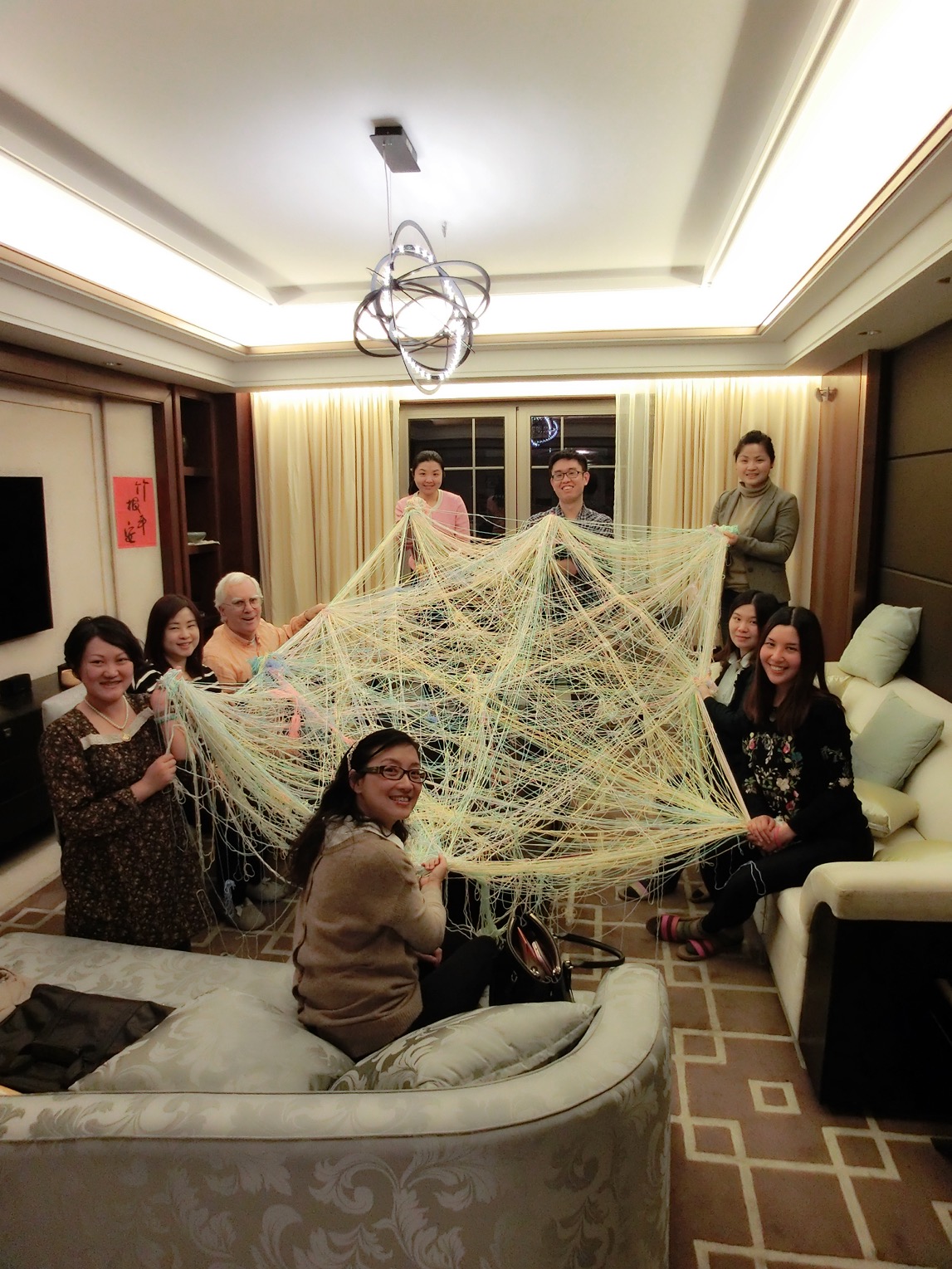 A Hari Om Prayer Blanket requires between ten and twenty-five people, and a ball of coloured wool (or even two) for each person. Everyone sits around a circle so that they can see and hear everyone.

Then there is about 5 minutes of silent meditation.

After the short meditation the circle is divided into four groups and given four different chants to represents the four grandparents and the four seasons. The four chants are Om Hari, Om Om, Hari Om, and Hari Hari. Each groups starts chanting these repeatedly, starting at the same moment and staying in synch or rhythm with each other. Then the leader chants the four different chants one after the other. After about 5 minutes a pause is taken and the circle is divided into 8 sections with 8 different chants. The eight chants are Om Hari Hari, Om Hari Om, Om Om Hari, Om Om Om, Hari Om Om, Hari Om Hari, Hari Hari Om, and Hari Hari Hari, Once these are all being chanted together the the leader will chant the eight chants in sequence. This creates a temple of sound that has a living presence to it. The rhythms can be felt changing around the circle while there is also a trance inducing pulsation being felt. Each chanter feels that they are a part of a living whole, and they are! This sound temple chanting is kept up for about 15 minutes.

At the end of this time, three Oms are said in unison and there is a 5 to 10 minute period of silent meditation.

Now with the vibrations at a vivid aliveness, the balls of wool are distributed around the circle.

Everyone holds on to the end of the thread, and says Hari Om as they throw the ball of wool gently across the circle, to someone there, who has to throw their ball saying Hari Om and then do the same with the new ball of wool that came to them. Usually you look to make sure the person is ready to receive the ball before throwing it. Every time someone throws the ball of wool across the circle they send it with a prayer of Hari Om. This will continue until the balls of wool run out and one can see a wildly woven blanket in the centre.

Everyone is now holding onto a handful of the ends of wool strings. Each person now pushes the woven strings towards the centre and ties a knot in their end of the wool. Once this is done the prayer blanket is made and will hold together.

What we have now is a blanket made from prayers. Every strand of wool was accompanied by a name of God. It is a God permeated blanket. It now has special healing vibrations that will calm the heart and keep negative thoughts and bad psychic energies away.

The prayer blanket is then put over the bed of the soon to be newborn baby (or of anyone needing healing).

The baby will see the blanket above them as if it were a colourful sky above. This will keep thoughts and feelings positive when one goes to bed and when one wakes. It will prevent bad dreams and worries from reaching the baby. The baby will feel protected and happy. It is the beginning of a very special relationship to life and spirit.

A prayer blanket is a wonderful thing to do. It is a positive thing to participate in. It creates a positive blanket, which has long term ongoing positive vibrations. The parents feel wonderfully supported and the baby has a special holy place to rest under. Good vibrations all around!