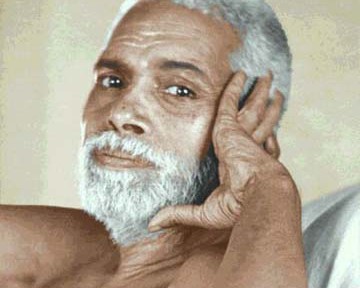 An excerpt from The Collected Works of Ramana Maharshi by Arthur Osborne.
There is an excellent website for Ramana Ashram that includes many photos and all of Sri Ramana’s works. Visit them online at: www.ramanamaharshi.org

10. How will the mind become quiescent?
By the inquiry ‘Who am I?’. The thought ‘who am I?’ will destroy all other thoughts, and like the stick used for stirring the burning pyre, it will itself in the end get destroyed. Then, there will arise Self-realization.
11. What is the means for constantly holding on to the thought Who am I?’
When other thoughts arise, one should not pursue them, but should inquire: ‘To whom did they arise?’ It does not matter how many thoughts arise. As each thought arises, one should inquire with diligence, ‘To whom has this thought arisen?’ The answer that would emerge would be ‘To me’. Thereupon if one inquires ‘Who am I?’, the mind will go back to its source; and the thought that arose will become quiescent. With repeated practice in this manner, the mind will develop the skill to stay in its source. When the mind that is subtle goes out through the brain and the sense-organs, the gross names and forms appear; when it stays in the heart, the names and forms disappear. Not letting the mind go out but retaining it in the Heart is what is called ‘inwardness (antar-mukha), Letting the mind to go out of the Heart is known as ‘externalization’ (bahir-mukha). Thus, when the mind stays in the Heart, the ‘I’ which is the source of all thoughts will go, and the Self which ever exists will shine, Whatever one does, one should do without the egoity ‘I’. If one acts in that way, all will appear as of the nature of Siva (God.)
12. Are there no other means for making the mind quiescent?
Other than inquiry, there are no adequate means. Through other means it is sought to control the mind, the mind will appear to be controlled, but will again go forth. Through the control of breath also, the mind will become quiescent; but it will be quiescent only so long as the breath remains controlled, and when the breath resumes the mind also will again start moving and will wander as impelled by residual impressions. The source is the same for both mind and breath. Thought, indeed, is the nature of the mind. The thought ‘I is the first thought of the mind; and that is egoity. it is from that whence egoity originates that breath also originates. Therefore, when the mind becomes quiescent, the breath is controlled, and when the breath is controlled the mind becomes quiescent. But in deep sleep, although the mind becomes quiescent, the breath does not stop. This is because of the will of God, so that the body may be preserved and other people may not be under the impression that it is dead. In the state of waking and in samadhi, when the mind becomes quiescent the breath is controlled. Breath is the gross form of mind. Until the time of death, the mind keeps breath in the body; and when the body dies the mind takes the breath along with it. Therefore, the exercise of breath-control is only an aid for rendering the mind quiescent (manonigraha); it will not destroy the mind (manonasa)
Like the practice of breath-control, meditation on the forms of God, repetition of mantras, restriction on food, etc., are but aids for rendering the mind quiescent.
Through meditation on the forms of God and through repetition of mantras, the mind becomes one-pointed. The mind will always be wandering. Just as when a chain is given to an elephant to hold in its trunk it will go along grasping the chain and nothing else, so also when the mind is occupied with a name or form it will grasp that alone. When the mind expands in the form of countless thoughts, each thought becomes weak; but as thoughts get resolved the mind becomes one-pointed and strong; for such a mind Self-inquiry will become easy. Of all the restrictive rules, that relating to the taking of sãtvic food in moderate quantities is the best; by observing this rule, the sãtvic quality of mind will increase, and that will be helpful to Self-inquiry.