My Time In Silence and Solitude In India

My Time In Silence and Solitude In India

It is now almost thirty years since I first went to India. I spent twenty-two months in India, but I only saw four months of India with my eyes. When the vision came I became attached to it. It was alive and thrilled with meaning. I chose to accept the vision and follow it. How could one argue with a vision that came after so much time alone and praying? I now think that a more spiritual person would have stayed in the room and not followed the vision! In all honesty, I do not think that I was ready to do that! I had karma out in the world that I had to meet with and take care of. I probably had gone as far as I was able to at the time. In the deepest honesty of my heart, I realized that I had desires that pulled me back into the world.
Everyone has the Maun mandir in the temple of their own heart, inside the tempests of the mind, the emotions and the psychic nature. The ignorance in the world is that most people are not aware of this fact. Somewhere in the heat of my vision I made a choice to champion education and fight ignorance. This decision led me back to North America. 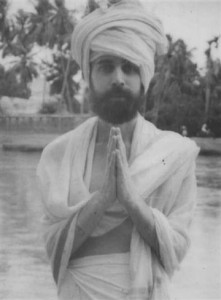 Meditation
Meditation is simply the cultivation of the experience of silence. It is the simplest thing in the world to do. Any child could do it. Meditation is an accumulative experience. One can only know as much silence as he or she has experienced. Across a lifetime one can add up the total minutes of silence experienced as a measure of one’s depth in meditation.
The thoughts that come into one’s mind when one is alone, that is one’s karma. To change or transform these thoughts is a great work that requires much conscious effort.
When one is alone long enough one comes to know the thoughts that arise in one’s mind.
When one is alone for a much longer time, one’s thoughts become so familiar that one loses interest in them.
As one loses interest in one’s thoughts and one’s aloneness continues, conscious attention becomes focused on the feelings and emotions behind the thoughts. For every emotion the consciousness, in time, becomes aware of the volume of thoughts produced or attached to that emotion. Every thought associated to that emotion that we have experienced in our life will run through our mind for some time until a new or different emotion arises.
When one has been alone for a much longer time, one becomes familiar with the spectrum of one’s emotions. All of one’s emotions no matter how obscure come to the conscious attention again and again and again.
In time, when one has been alone for a considerably longer time, one gets bored with one’s emotions, and loses interest in the thoughts they stimulate. One’s interest fades away and one comes to peace with one’s emotions.
As this sense of detachment and peace grows, one’s consciousness becomes aware of a silent presence behind the emotions.
The greater challenge is to maintain this silent presence when one is not alone, in the midst of living.  This silent presence permeates us all, and in time, aloneness falls away, and like time, it becomes irrelevant.

(Written June 13,1997, nine weeks before returning to India and entering Maun room for the fifth time.)