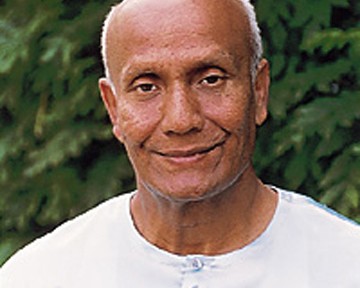 The Wisdom of Sri Chinmoy

Karma Yoga is desireless action undertaken for the sake of the Supreme. Karma Yoga is man’s genuine acceptance of his earthly existence. Karma Yoga is man’s dauntless march across the battle field of life. Karma Yoga does not see eye to eye with those who hold that activities of human life are of no importance. Karma Yoga claims that life is a divine opportunity for serving God. This particular Yoga is not only the Yoga of physical action; it includes the aspirant’s moral and inner life as well.
Those who follow this path pray for a strong and perfect body. They also pray for a long life. This long life is not a mere promulgation of life in terms of years. It is a life that longs for the descent of the divine Truth, Light, and power into the material realm. The karma Yogins are the real heros on the earthly scene, and theirs is the divinely triumphant victory.
A karma Yogin is a perfect stranger to the waves of disappointment and despair in human life. He feels himself to be the hyphen between earthly duties and heavenly responsibilities. He has many weapons to conquer the world, but his detachment is the most powerful. His detachment defies both the crushing blows of failure and the ego-gratifying surges of success. His detachment is far beyond both the snares of the world’s excruciating pangs and the embrace of the world’s throbbing joy.
Many sincere aspirants feel that the devotional feelings of a bhakta and the penetrating eye of a jnani have no place in Karma Yoga. Here they are quite mistaken. A true karma Yogin is he whose heart has implicit faith in God, whose mind has a constant awareness of God and whose body has a genuine love for humanity.
It is easy for a bhakta to forget the world, and for a jnani to ignore the world. But a karma Yogin’s destiny is otherwise. God wants him to live in the world, live with the world and live for the world.